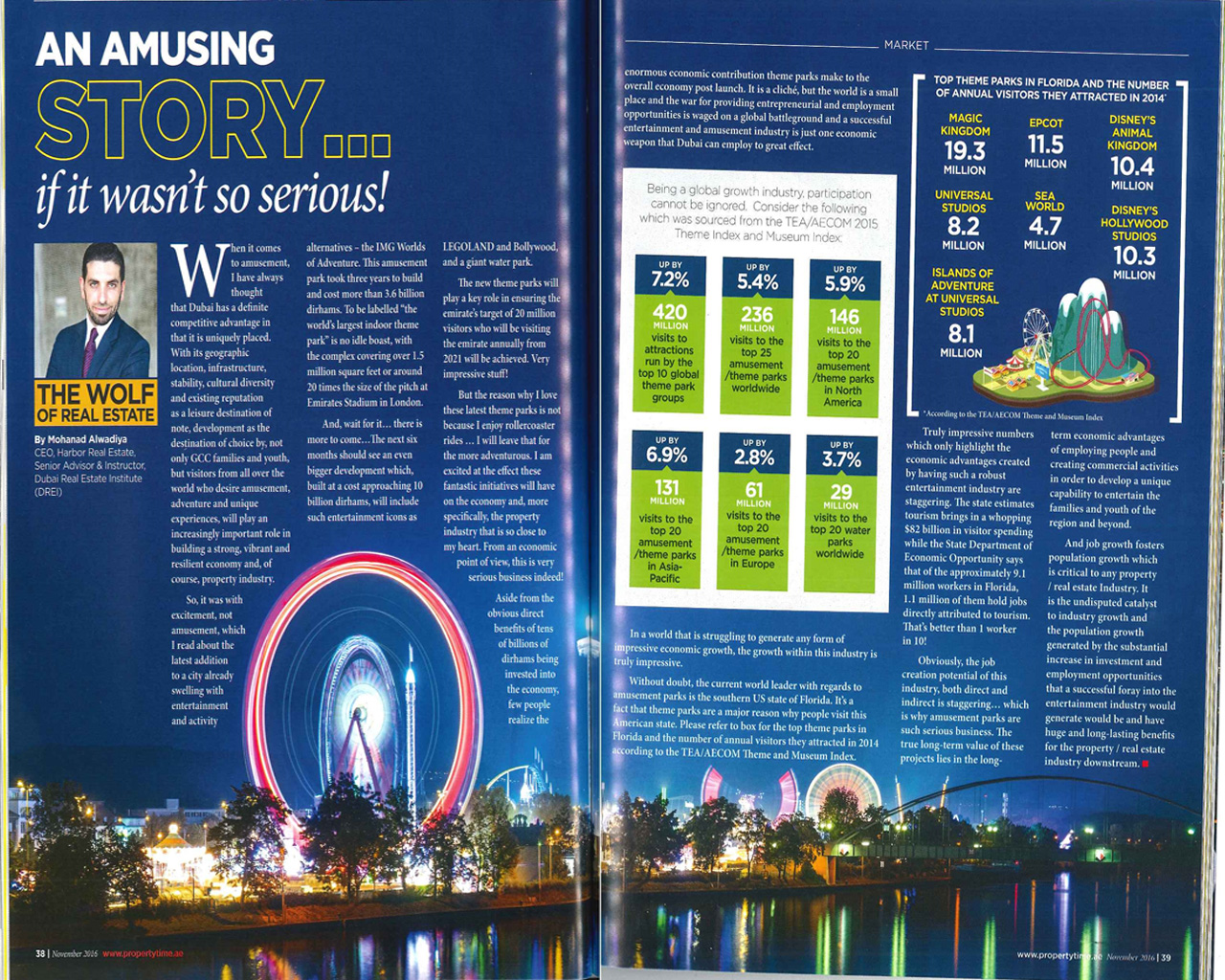 AN AMUSING STORY… IF IT WASN’T SO SERIOUS!

When it comes to amusement, I have always thought that Dubai has a definite competitive advantage in that it is uniquely placed. With its geographic location, infrastructure, stability, cultural diversity and existing reputation as a leisure destination of note, development as the destination of choice by, not only GCC families and youth, but visitors from all over the world who desire amusement, adventure and unique experiences, will play an increasingly important role in building a strong, vibrant and resilient economy and, of course, property industry.

So, it was with excitement, not amusement, which I read about the latest addition to a city already swelling with entertainment and activity alternatives – the IMG Worlds of Adventure. This amusement park took three years to build and cost more than 3.6 billion dirhams. To be labelled “the world’s largest indoor theme park” is no idle boast, with the complex covering over 1.5 million square feet or around 20 times the size of the pitch at Emirates Stadium in London.

And, wait for it… there is more to come…

The next six months should see an even bigger development which, built at a cost approaching 10 billion dirhams, will include such entertainment icons as LEGOLAND and Bollywood, and a giant water park.

The new theme parks will play a key role in ensuring the emirate’s target of 20 million visitors will be visiting the emirate annually from 2021 will be achieved. Very impressive stuff!

But the reason why I love these latest theme parks is not because I enjoy rollercoaster rides … I will leave that for the more adventurous. I am excited at the effect these fantastic initiatives will have on the economy and, more specifically, the property industry that is so close to my heart.

From an economic point of view, this is very serious business indeed!

Aside from the obvious direct benefits of tens of billions of dirhams being invested into the economy, few people realize the enormous economic contribution theme parks make to the overall economy post launch. It is a cliché, but the world is a small place and the war for providing entrepreneurial and employment opportunities is waged on a global battleground and a successful entertainment and amusement industry is just one economic weapon that Dubai can employ to great effect.

And being a global growth industry, participation cannot be ignored.  Consider the following which was sourced from the TEA/AECOM 2015 Theme Index and Museum Index:

In a world that is struggling to generate any form of impressive economic growth, the growth within this industry is truly impressive.

Without doubt, the current world leader with regards to amusement parks is the southern US state of Florida. It’s a fact that theme parks are a major reason why people visit this American state. Here are the top theme parks in Florida and the number of annual visitors they attracted in 2014 according to the TEA/AECOM Theme and Museum Index…

Truly impressive numbers which only highlight that the economic advantages created by having such a robust entertainment industry are staggering. The state estimates tourism brings in a whopping $82 billion in visitor spending while the State Department of Economic Opportunity says that of the approximately 9.1 million workers in Florida, 1.1 million of them hold jobs directly attributed to tourism. That’s better than 1 worker in 10!

Obviously, the job creation potential of this industry, both direct and indirect is staggering… which is why amusement parks are such serious business. The true long-term value of these projects lies in the long-term economic advantages of employing people and creating commercial activities in order to develop a unique capability to entertain the families and youth of the region and beyond.

And job growth fosters population growth which is critical to any property / real estate Industry. It is the undisputed catalyst to industry growth and the population growth generated by the substantial increase in investment and employment opportunities that a successful foray into the entertainment industry would generate would be and have huge and long-lasting benefits for the property / real estate industry downstream.