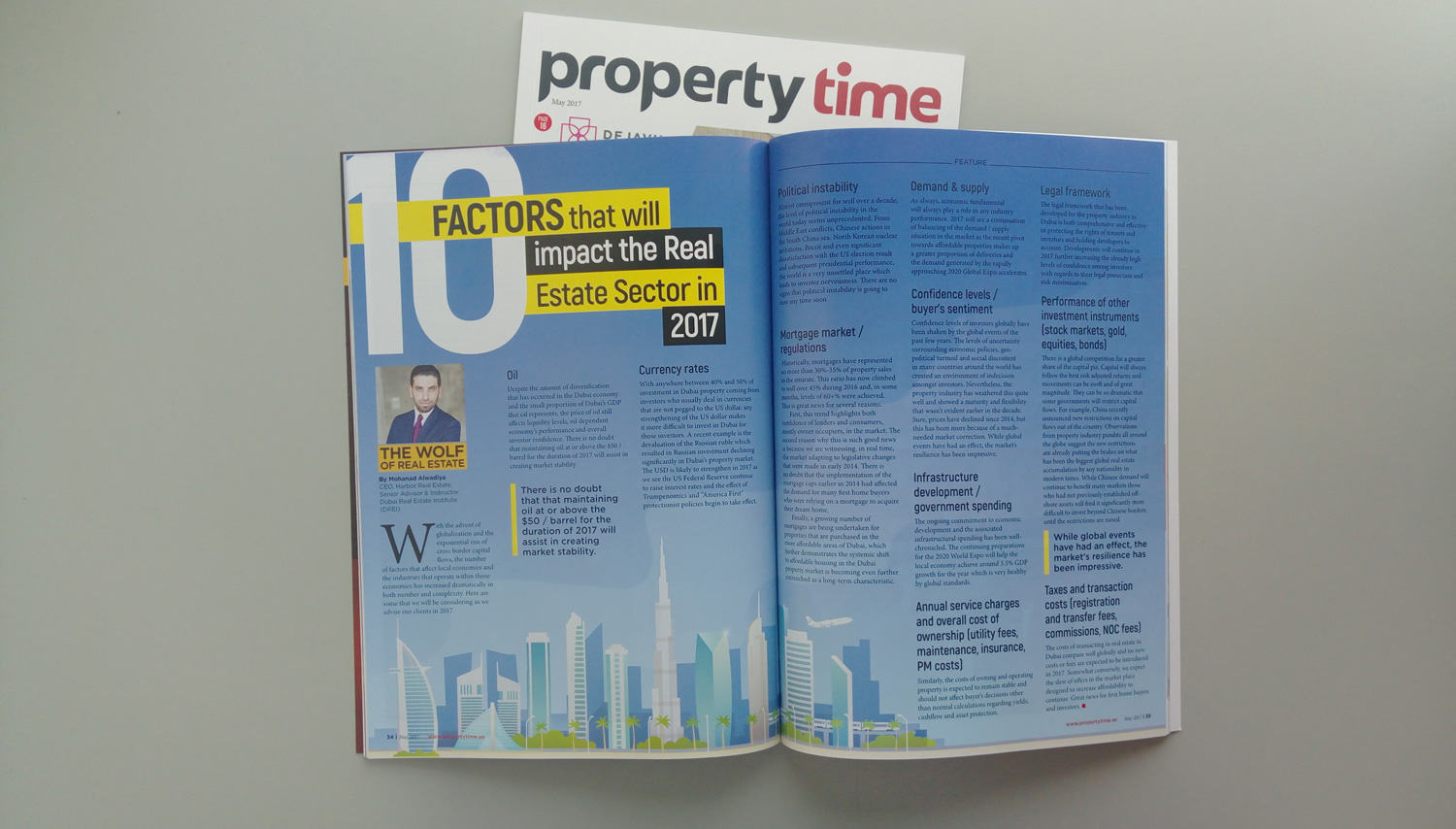 Factors that will impact the Real Estate Sector in 2017

With the advent of globalization and the exponential rise of cross border capital flows, the number of factors that affect local economies and the industries that operate within those economies has increased dramatically in both number and complexity. Here are some that we will be considering as we advise our clients in 2017.

Oil. Despite the amount of diversification that has occurred in the Dubai economy and the small proportion of Dubai’s GDP that oil represents, the price of oil still affects liquidity levels, oil dependent economy’s performance and overall investor confidence. There is no doubt that that maintaining oil at or above the $50 / barrel for the duration of 2017 will assist in creating market stability.

Currency rates. With anywhere between 40% and 50% of investment in Dubai property coming from investors who usually deal in currencies that are not pegged to the US dollar, any strengthening of the US dollar makes it more difficult to invest in Dubai for those investors. A recent example is the devaluation of the Russian ruble which resulted in Russian investment declining significantly in Dubai’s property market. The USD is likely to strengthen in 2017 as we see the US Federal Reserve continue to raise interest rates and the effect of Trumpenomics and “America First” protectionist policies begin to take effect.

Political instability. Almost omnipresent for well over a decade, the level of political instability in the world today seems unprecedented. From Middle East conflicts, Chinese actions in the South China sea, North Korean nuclear ambitions, Brexit and even significant dissatisfaction with the US election result and subsequent presidential performance, the world is a very unsettled place which leads to investor nervousness. There are no signs that political instability is going to ease any time soon.

Demand and supply. As always, economic fundamental will always play a role in any industry performance. 2017 will see a continuation of balancing of the demand / supply situation in the market as the recent pivot towards affordable properties makes up a greater proportion of deliveries and the demand generated by the rapidly approaching 2020 Global Expo accelerates.

Legal framework. The legal framework that has been developed for the property industry in Dubai has is both comprehensive and effective in protecting the rights of tenants and investors and holding developers to account. Developments will continue in 2017 further increasing the already high levels of confidence among investors with regards to their legal protection and risk minimization.

Mortgage market/ regulations. Historically, mortgages have represented no more than 30%-35% of property sales in the emirate. This ratio has now climbed to well over 45% during 2016 and, in some months, levels of 60+% were achieved. This is great news for several reasons.

First, this trend highlights both confidence of lenders and consumers, mostly owner occupiers, in the market. The second reason why this is such good news is because we are witnessing, in real time, the market adapting to legislative changes that were made in early 2014. There is no doubt that the implementation of the mortgage caps earlier in 2014 had affected the demand for many first home buyers who were relying on a mortgage to acquire their dream home

Finally, a growing number of mortgages are being undertaken for properties that are purchased in the more affordable areas of Dubai, which further demonstrates the systemic shift to affordable housing in the Dubai property market is becoming even further entrenched as a long-term characteristic.

Confidence levels/ buyer’s sentiment. Confidence levels of investors globally have been shaken by the global events of the past few years. The levels of uncertainty surrounding economic policies, geo-political turmoil and social discontent in many countries around the world has created an environment of indecision amongst investors. Nevertheless, the property industry has weathered this quite well and showed a maturity and flexibility that wasn’t evident earlier in the decade. Sure, prices have declined since 2014, but this has been more because of a much-needed market correction. While global events have had an effect, the market’s resilience has been impressive.

Performance of other investment instruments (stock markets, gold, equities, bonds). There is a global competition for a greater share of the capital pie. Capital will always follow the best risk adjusted returns and movements can be swift and of great magnitude. They can be so dramatic that some governments will restrict capital flows. For example, China recently announced new restrictions on capital flows out of the country. Observations from property industry pundits all around the globe suggest the new restrictions are already putting the brakes on what has been the biggest global real estate accumulation by any nationality in modern times. While Chinese demand will continue to benefit many markets those who had not previously established off-shore assets will find it significantly more difficult to invest beyond Chinese borders until the restrictions are raised.

Infrastructure development / government spending. The ongoing commitment to economic development and the associated infrastructural spending has been well-chronicled. The continuing preparations for the 2020 World Expo will help the local economy achieve around 3.5% GDP growth for the year which is very healthy by global standards.

Taxes and transaction costs (registration and transfer fees, commissions, NOC fees) The costs of transacting in real estate in Dubai compare well globally and no new costs or fees are expected to be introduced in 2017. Somewhat conversely, we expect the slew of offers in the market place designed to increase affordability to continue. Great news for first home buyers and investors.

Annual service charges and overall cost of ownership (utility fees, maintenance, insurance, PM costs) Similarly, the costs of owning and operating property is expected to remain stable and should not affect buyer’s decisions other than normal calculations regarding yields, cashflow and asset protection.