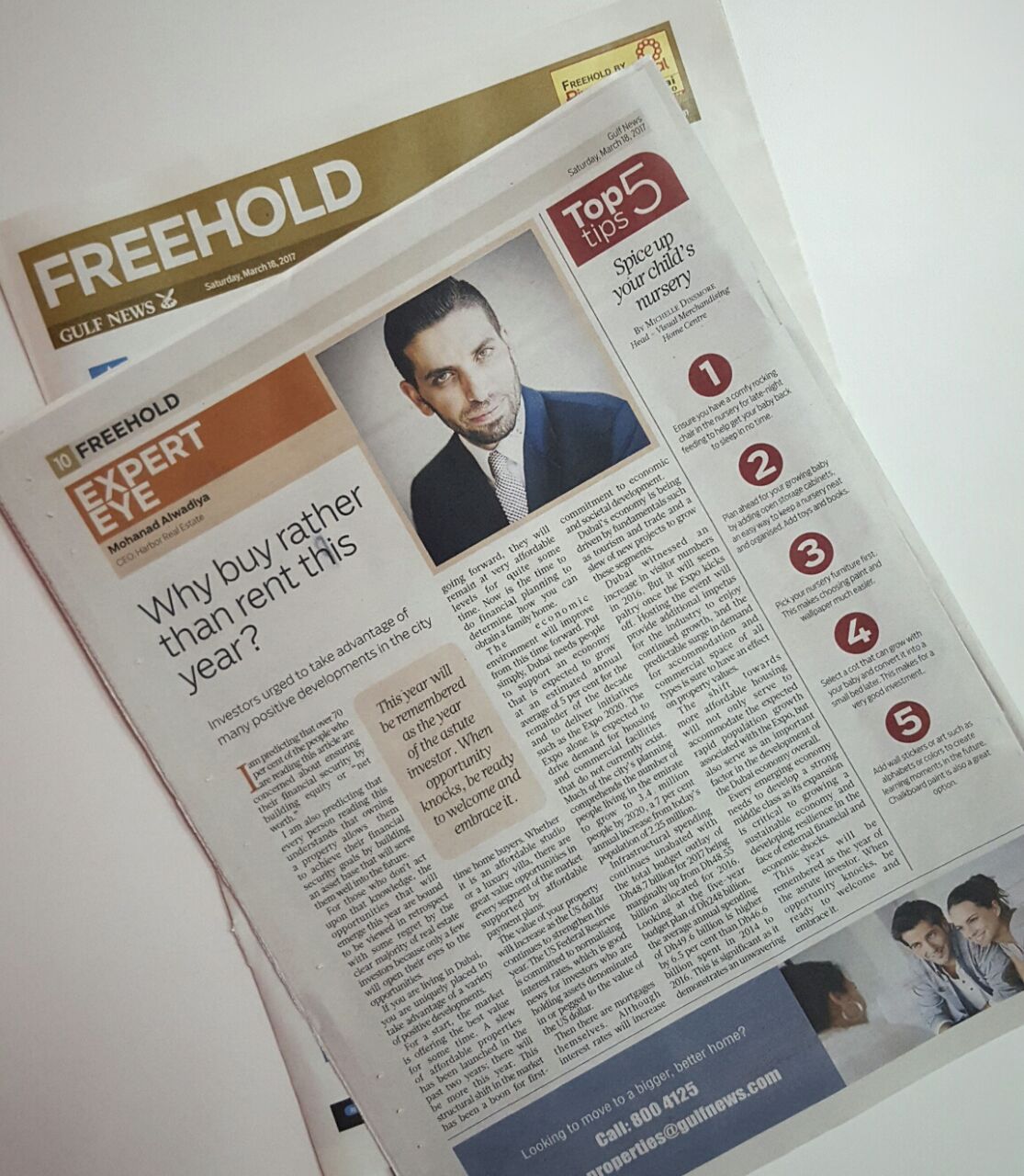 Why buy rather than rent this year?

I am predicting that over 70% of the people who are reading this article are concerned about ensuring their financial security by building equity or “net worth”.

I am also predicting that every person reading this article understands that owning property allows will allow them to achieve their financial security goals by building an asset base that will serve them and their families’ well into the future.

For those who don’t act upon that knowledge, the opportunities that will emerge in 2017 will go begging and are bound to be viewed in retrospect with some regret by the clear majority of Real Estate investors because, put simply, only a few will open their eyes to the opportunities that 2017 will offer. History has shown us time and again, the majority will be too late to make the most of the opportunities on offer today. They will wait, pontificate and procrastinate and, later ruminate on how they missed the boat.

If you are living in Dubai now, you are uniquely placed to take advantage of a variety of positive developments.

For a start, the market is offering the best value for some time. A slew of affordable properties that have been launched over the past 2 years and there will be more launched in 2017. This structural shift in the market has been a boon for first home buyers and affordability, or a lack thereof, as a reason to continue to rent is disappearing fast. Whether it’s an affordable studio or a luxury villa, there are great value opportunities in every segment of the market supported by the most affordable payment plans seen in years.

Also, the value of your property will be increasing as the US dollar continues to strengthen in 2017. The US Federal reserve is committed to normalizing interest rates in 2017 which is good news for investors who are holding assets denominated in or pegged to the value of the US dollar.

And then there are mortgages themselves … although interest rates will be increasing going forward, they will remain at very affordable levels for quite some time. Now is the time to do some financial planning to determine how you can obtain that most desirable of assets, the family home.

And the economic environment will improve from this time forward. Put simply, Dubai needs people to support an economy that is expected to grow at an estimated annual average of 5% for the remainder of the decade and to deliver initiatives such as the 2020 World Expo. The Expo alone is expected to generate an additional 270,000 jobs and drive demand for housing and commercial facilities that, by and large, don’t currently exist. Much of the city’s planning comprehends the number of people living in the emirate to grow to 3.4 million people by 2020, a 7% annual increase from today’s population of 2.25 million.

While the price of oil is a big issue for the region’s economies, with oil representing only about 4% of Dubai’s GDP, the effect of the decline in oil prices is not as drastic as some may think. Infrastructural spending continues unabated with the total budget outlay of Dh 48.7 billion for 2017 being marginally up from Dh 48.55 billion allocated to 2016. Looking at the 5-year budget plan of Dh 248 billion, the average annual spending of Dh49.6 billion is higher by 6.5 per cent than Dh 46.6 billion spent during 2014 to 2016 inclusive. This is significant as it demonstrates an unwavering commitment to economic and societal development.

Dubai’s economy is being driven by fundamentals such as tourism and trade and a slew of new projects to grow these important revenue generating economic segments. Predicted by Mastercard’s Global Destination Cities Index to be the 4th most popular destination in the world by year end, Dubai will have welcomed almost 16 million overnight visitors in the by the close of 2016. This will represent a 12% increase over 2015 and continue a trend of approximately 10% per annum since 2010.

And those visitor number will seem paltry once the 2020 Expo kicks off. And the 277,000 extra jobs that are generated to ensure the estimated 20 million visitors to the Expo see Dubai in its most favorable light cannot be underrated in terms generating significant demand for Real Estate assets. Hosting the World Expo will provide additional impetus for the industry to enjoy continued growth and the predictable surge in demand for accommodation and commercial space of all types is sure to have a significant effect on property values.

The structural shift towards more affordable housing will not only serve to accommodate the expected rapid population growth associated with the 2020 expo, but also serve as an important factor in the development of the Dubai economy overall. Every emerging economy needs to develop a strong middle class as its expansion is critical to growing a sustainable economy and developing resilience in the face of external financial and economic shocks.

2017 will be remembered as a year of the astute investor. When opportunity knocks, be ready to welcome and embrace it.