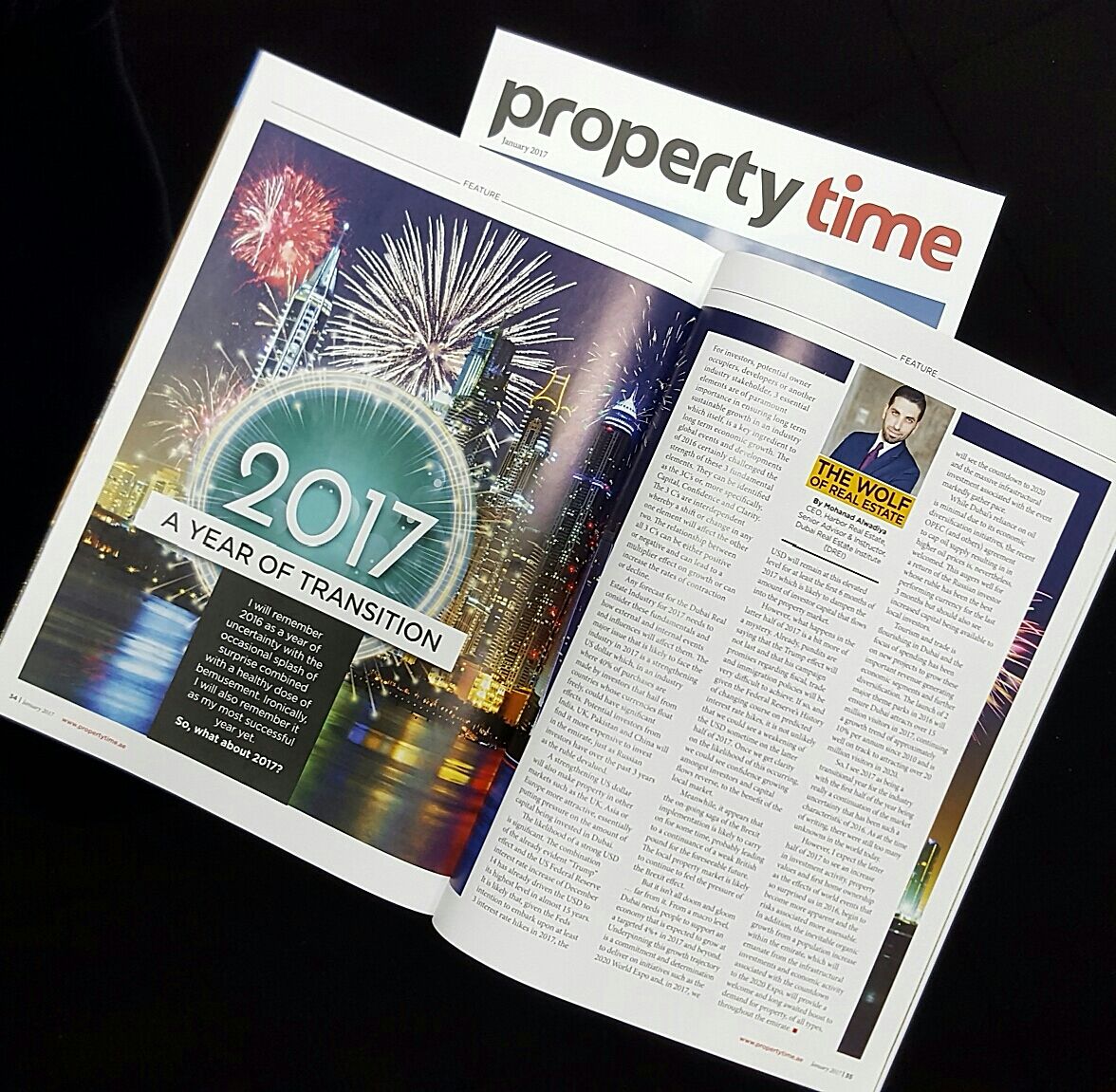 I will remember 2016 as a year of uncertainty with the occasional splash of surprise combined with a healthy dose of bemusement. Ironically,  I will also remember it as my most successful year yet.

For investors, potential owner occupiers, developers or another industry stakeholder, 3 essential elements are of paramount importance in ensuring long term sustainable growth in an industry which itself, is a key ingredient to long term economic growth. The global events and developments of 2016 certainly challenged the strength of these 3 fundamental elements.

They can be identified as the 3C’s or, more specifically, Capital, Confidence and Clarity. The 3 C’s are interdependent whereby a shift or change in any one element will affect the other two. The relationship between all 3 C’s can be either positive or negative and can lead to a multiplier effect on growth or can increase the rates of contraction or decline.

Any forecast for the Dubai Real Estate Industry for 2017 needs to consider these fundamentals and how external and internal events and influences will affect them.

The major issue that is likely to face the industry in 2017 is a strengthening US dollar which, in an industry where 40% of purchases are made by investors that hail from countries whose currencies float freely, could have significant effects. Potential investors from India, UK, Pakistan and China will find it more expensive to invest in the emirate, just as Russian investors have over the past 3 years as the ruble devalued.

A strengthening US dollar will also make property in other markets such as the UK, Asia or Europe more attractive, essentially putting pressure on the amount of capital being invested in Dubai.

The likelihood of a strong USD is significant. The combination of the already evident “Trump” effect and the US Federal Reserve interest rate increase of December 14 already has already driven the USD to its highest level in almost 15 years. It is likely that, given the Feds intention to embark upon at least 3 interest rate hikes in 2017, the USD will remain at this elevated level for at least the first 6 months of 2017 which is likely to dampen the amount of investor capital that flows into the property market.

However, what happens in the latter half of 2017 is a bit more of a mystery. Already, pundits are saying that the Trump effect will not last and that his campaign promises regarding fiscal, trade and immigration policies will be very difficult to achieve. If so, and given the Federal Reserve’s History of changing course on predicted interest rate hikes, it is not unlikely that we could see a weakening of the USD sometime on the latter half of 2017. Once we get clarity on the likelihood of this occurring, we could see confidence growing amongst investors and capital flows reverse, to the benefit of the local market.

Meanwhile, it appears that the on-going saga of the Brexit implementation is likely to carry on for some time, probably leading to a continuance of a weak British pound for the foreseeable future. The local property market is likely to continue to feel the pressure of the Brexit effect.

But it isn’t all doom and gloom … far from it.

From a macro level, Dubai needs people to support an economy that is expected to grow at a targeted 4%+ in 2017 and beyond. Underpinning this growth trajectory is a commitment and determination to deliver on initiatives such as the 2020 World Expo and, in 2017, we will see the countdown to 2020 and the massive infrastructural investment associated with the event markedly gather pace.

While Dubai’s reliance on oil is minimal due to its economic diversification initiatives, the recent OPEC (and others) agreement to cap oil supply resulting in in higher oil prices is, nevertheless, welcomed. This augers well for a return of the Russian investor whose ruble has been the best performing currency for the last 3 months but should also see increased capital being available to local investors.

Tourism and trade is flourishing in Dubai and the focus of spending has been on new projects to grow these important revenue generating economic segments and further diversification. The launch of 2 major theme parks in 2016 will ensure Dubai attracts over 15 million visitors in 2017, continuing a growth trend of approximately 10% per annum since 2010 and is well on track to attracting over 20 million visitors in 2020.

So, I see 2017 as being a transitional year for the industry with the first half of the year being really a continuation of the market uncertainty that has been such a characteristic of 2016. As at the time of writing, there were still too many unknowns in the world today.

However, I expect the latter half of 2017 to see an increase in investment activity, property values and first home ownership as the effects of world events that so surprised us in 2016, begin to become more apparent and the risks associated more assessable. In addition, the inevitable organic growth from a population increase within the emirate, which will emanate from the infrastructural investments and economic activity associated with the countdown to the 2020 Expo, will provide a welcome and long awaited boost to demand for property, of all types, throughout the emirate.