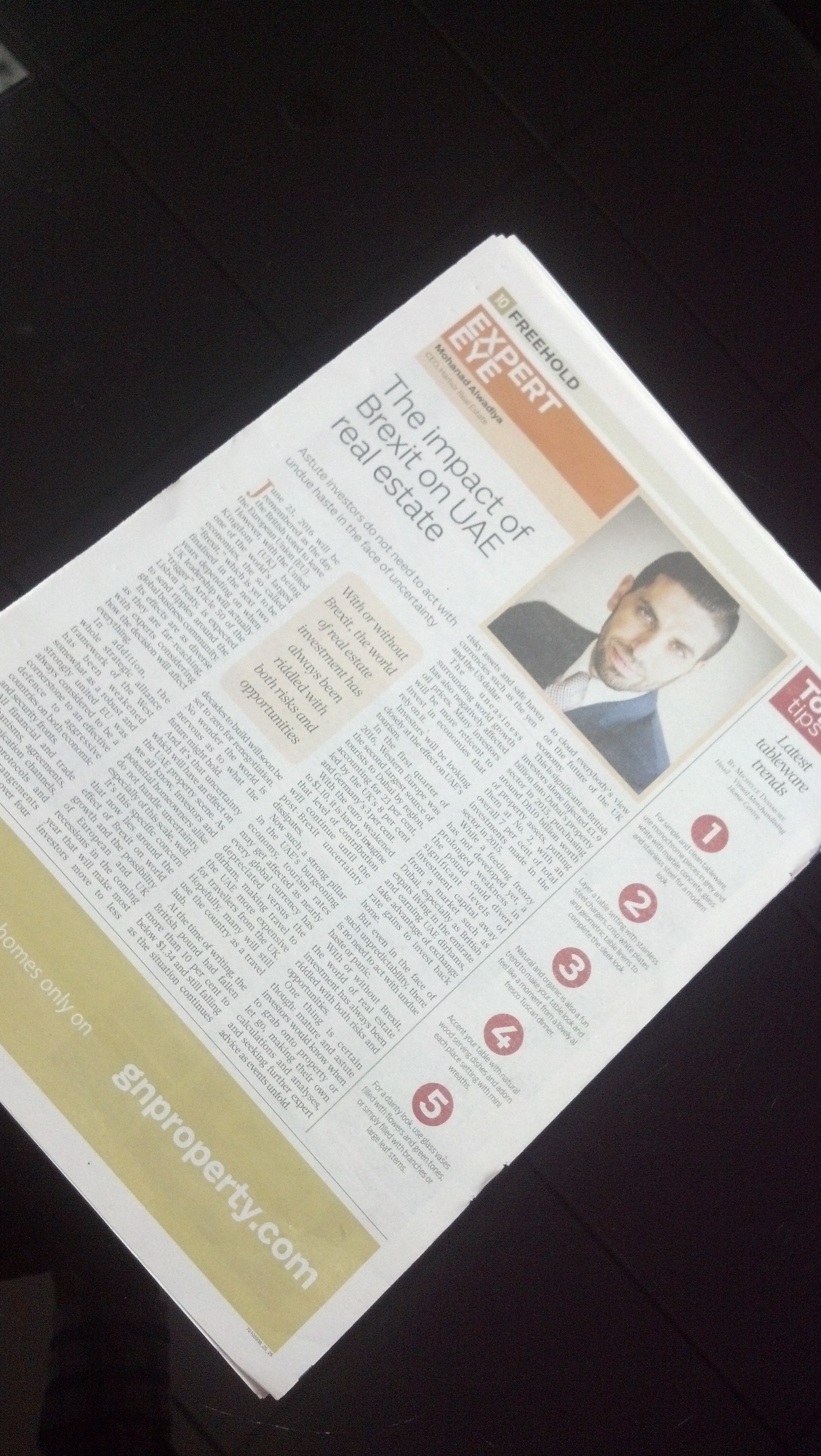 The impact of Brexit on UAE real estate

June 23, 2016 will forever be remembered in history as the day the British, all 52 percent of the 71.8 percent referendum turnout versus the 48 percent who elected to stay, voted to leave the European Union (EU).

However, with the United Kingdom being one of the world’s largest economies, the so-called “Brexit” which is yet to be finalized in the next two years depending on when UK leadership will actually “trigger” Article 50 of the Lisbon Treaty is expected to send ripples around the global business community, not to mention the political ramifications of said move.

The effects of Brexit are as diverse as they are far-reaching, with experts considering how the decision made by the majority of Brits will affect everything from the European geopolitical and socio-economic landscape, the strength and resilience of the European Union in the face of further discontent within its member states, the social and economic ramifications to a newly  “independent” United Kingdom and the inevitable question as to whether the United Kingdom can remain united given the Scottish and  Northern Island  wishes to continue as part of the EU.

In addition, the whole strategic alliance framework of the West has been weakened somewhat as a robust and strongly united European Union was always considered to be a cornerstone to an effective defence to an aggressive Russia and China on both economic and security fronts.

Understandably, the whole world is worried because all the financial and trade mechanisms, agreements, communication channels, policies, protocols and security arrangements that have taken over four decades to build will soon be set to zero for renegotiation.
No wonder the world is nervous and understandably uncertain as to what the future might hold.

And it’s that uncertainty which will have an effect on the UAE property scene. As we all know, investors and potential homeowners alike do not handle uncertainty, especially of this scale, well.

And it’s uncertainty that now lies around the effect of the Brexit on world growth and the possibility of European and UK recessions in the coming year that will make most investors move to less risky assets and safe haven currencies such as the Yen and the US dollar.

Of course, uncertainty regarding world growth has also negatively affected oil prices so many investors will be more reticent to invest in those economies that rely on its revenue. While we all know that Dubai is much less reliant on oil than its neighbouring emirates and countries, it will still be affected by investor nervousness by way of association which is unfortunate yet a reality. Just look at the Dubai Financial Market. It lost 3.3 percent, the biggest decline since January, as Emaar Properties PJSC fell 4.7 percent, mirroring the Brexit effect on many other markets around the world. Hardly rational, in my view.

Investors will be looking closely at the effect on UAE’s tourism. In the first quarter of 2016, Western Europe was the second largest source of tourists to Dubai by region, accounting for 23 per cent, led by the UK’s eight per cent and Germany’s three per cent. With the Euro weakened to $1.10, and with most analysts bearish on its immediate future, it is hard to imagine that level of contribution will continue until the post-Brexit uncertainty dissipates. Now such a strong pillar in the UAE’s burgeoning economy, tourism rates can be affected as nearly every global currency has depreciated versus the AED, making travel to the UAE more expensive for the majority of global travellers while journeying to the UK and Europe for most people has just got a lot cheaper. Hopefully, many will still use the country as a travel hub from and take advantage of what this exciting country has to offer during stopovers.

At the time of writing, the British pound had fallen more than 10% to below $1.34 and still falling as uncertainty continues to cloud everybody’s view as to the future of the UK economy. This is significant as British investors alone injected £1.9 billion into Dubai’s property sector in 2015 purchasing around AED 10 billion worth of UAE property assets, putting them at No.2 with an overall 7 percent of total investments made in the sector in 2015.

Needless to say, with such a currency devaluation and an uncertain outlook, Dubai property has suddenly become a lot more expensive for those wishing to purchase with British pounds, while the London property market has just become a lot more affordable. While a feeding frenzy hasn’t developed as yet, a prolonged weakness in the pound could divert significant levels of investment capital away from a market such as Dubai, especially as British expats, living in the emirate and earning UAE dirhams, take advantage of exchange rate gains to invest back home.

But even in the face of such uncertainty, there is no need to act with undue haste or panic. With or without Brexit, the world of real estate investment has always been riddled with both risks and opportunities. One thing is certain, though, mature and astute investors would know when to grab onto property or let go, making their own calculations and analyses, and seeking further expert advice as events continue to unfold.