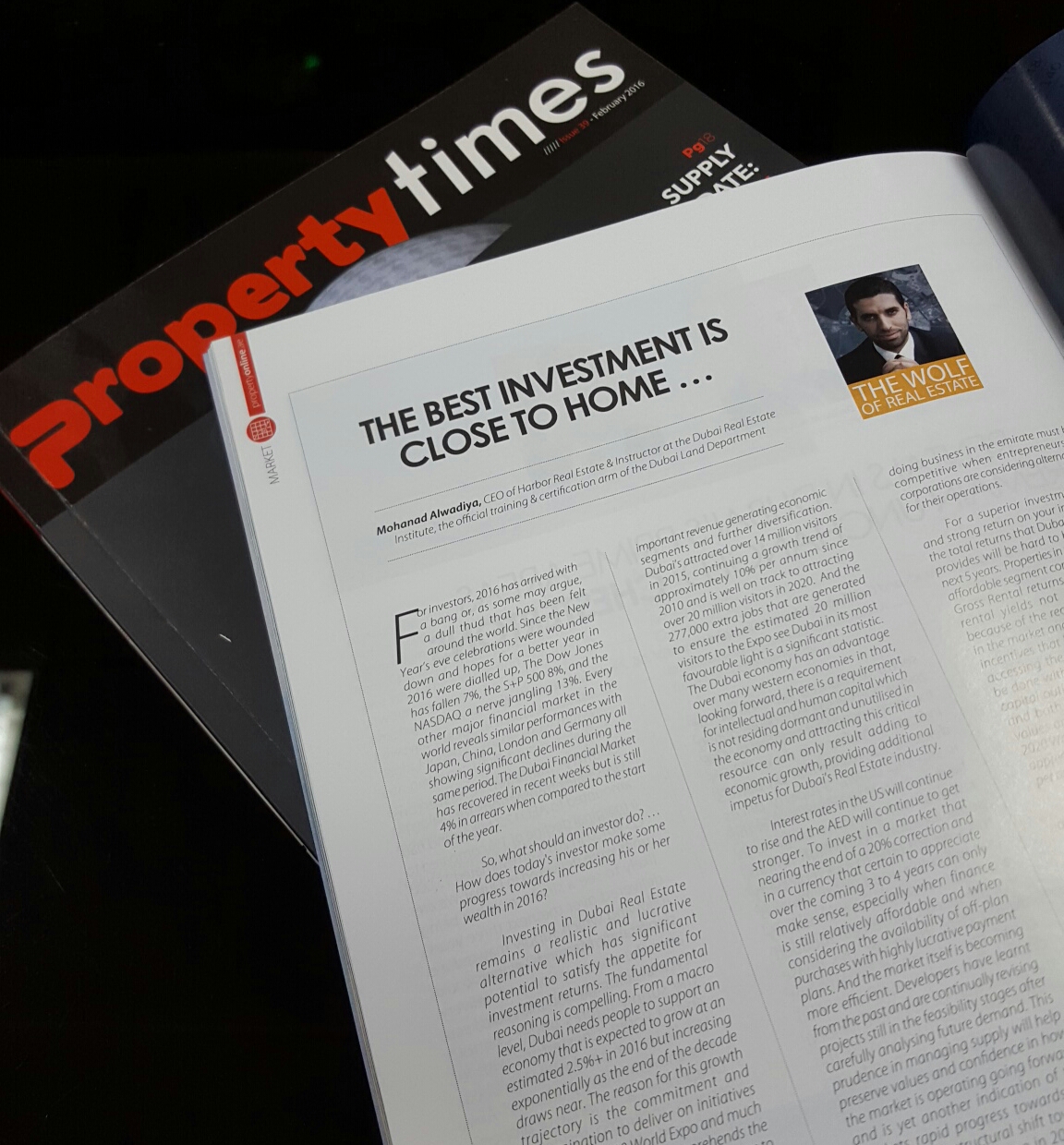 THE BEST INVESTMENT IS CLOSE TO HOME …

For investors, 2016 has arrived with a bang or, as some may argue, a dull thud that has been felt around the world. Since the New Year’s eve celebrations were wound down and hopes for a better year in 2016 were dialled up, The Dow Jones has fallen 7%, the S+P 500 8%, and the NASDAQ a nerve jangling 13%. Every other major financial market in the world reveals similar performances with Japan, China, London and Germany all showing significant declines during the same period. The Dubai Financial Market has recovered in recent weeks but is still 4% in arrears when compared to the start of the year.

So, what should an investor do? …  How does todays investor make some progress towards increasing his or her wealth in 2016?

Investing in Dubai Real Estate remains a realistic and lucrative alternative which has significant potential to satisfy the appetite for investment returns. The fundamental reasoning is compelling.

From a macro level, Dubai needs people to support an economy that is expected to grow at an estimated 2.5%+ in 2016 but increasing exponentially as the end of the decade draws near. The reason for this growth trajectory is the commitment and determination to deliver on initiatives such as the 2020 World Expo and much of the city’s planning comprehends the number of people living in the emirate to grow to 3.4million people by 2020, a 7% annual increase from today’s population of 2.25million.

Dubai has managed to develop a level of diversification that will allow it to weather the current global oversupply of oil. With oil representing only about 4% of Dubai’s GDP, the effect of the decline in oil prices is not as drastic as some may think. While a reduction in public spending is to be expected, Dubai’s economy is being driven by fundamentals such as tourism and trade and the focus of spending will be on new projects to grow these important revenue generating economic segments and further diversification.  Dubai’s attracted over 14 million visitors in 2015, continuing a growth trend of approximately 10% per annum since 2010 and is well on track to attracting over 20 million visitors in 2020.

And the 277,000 extra jobs that are generated to ensure the estimated 20 million visitors to the Expo see Dubai in its most favourable light is a significant statistic. The Dubai economy has an advantage over many western economies in that, looking forward, there is a requirement for intellectual and human capital which is not residing dormant and unutilised in the economy and attracting this critical resource can only result adding to economic growth, providing additional impetus for Dubai’s Real Estate industry.

Interest rates in the US will continue to rise and the AED will continue to get stronger. To invest in a market that nearing the end of a 20% correction and in a currency that certain to appreciate over the coming 3 to 4 years can only make sense, especially when finance is still relatively affordableand when considering the availability of off-plan purchases with highly lucrative payment plans.

And the market itself is becoming more efficient. Developers have learnt from the past and are continually revising projects still in the feasibility stages after carefully analysing future demand. This prudence in managing supply will help preserve values and confidence in how the market is operating going forward and is yet another indication of the markets rapid progress towards full maturity.

The structural shift towards more affordable housing in 2015 will serve as an important factor in the development of the Dubai economy overall. Every emerging economy needs to develop a strong middle class as its expansion is critical to growing a sustainable economy and developing resilience in the face of external financial and economic shocks. In addition, for Dubai to compete effectively on a regional and global basis, the cost of doing business in the emirate must be competitive when entrepreneurs or corporations are considering alternatives for their operations.

For a superior investment yield and strong return on your investment, the total returns that Dubai Real Estate provides will be hard to beat over the next 5 years.  Properties in the burgeoning affordable segment continue to provide Gross Rental returns of 8% with 10% rental yields not uncommon and, because of the recent price correction in the market and the slew of financial incentives that have been introduced, accessing the yields and returns can be done with comparatively minimal capital outlay. And the good news is, and both rental yields and property values are expected to increase as the 2020 World Expo draws nearer so capital appreciation is expected to average 7% per annum between now and 2020

But returns are only one side of the equation… what about the risk?  The ongoing development of the industry’s regulatory framework and implementation of laws and regulations to safeguard both consumer and investor interests, the overall industry and the economy at large from rampant and irresponsible speculative, predatory or unethical practices, reveals a mature and balanced approach to shaping an industry which exhibits sustainable growth over the long term. The industry is much more resilient in 2016 and investors have benefitted enormously from the developments in this area.

There is no doubt that the past year has been challenging for equity investors, frustrating for fixed income investors and costly for investors who saw the valuations of their mutual funds, many leveraged with cheap finance, lose 20% to 30% of their value.

An investment in Dubai’s Real Estate cannot be ignored as an alternative, whether as a primary source of returns or as a contributing participant of a broader investment portfolio, to successfully generating wealth.