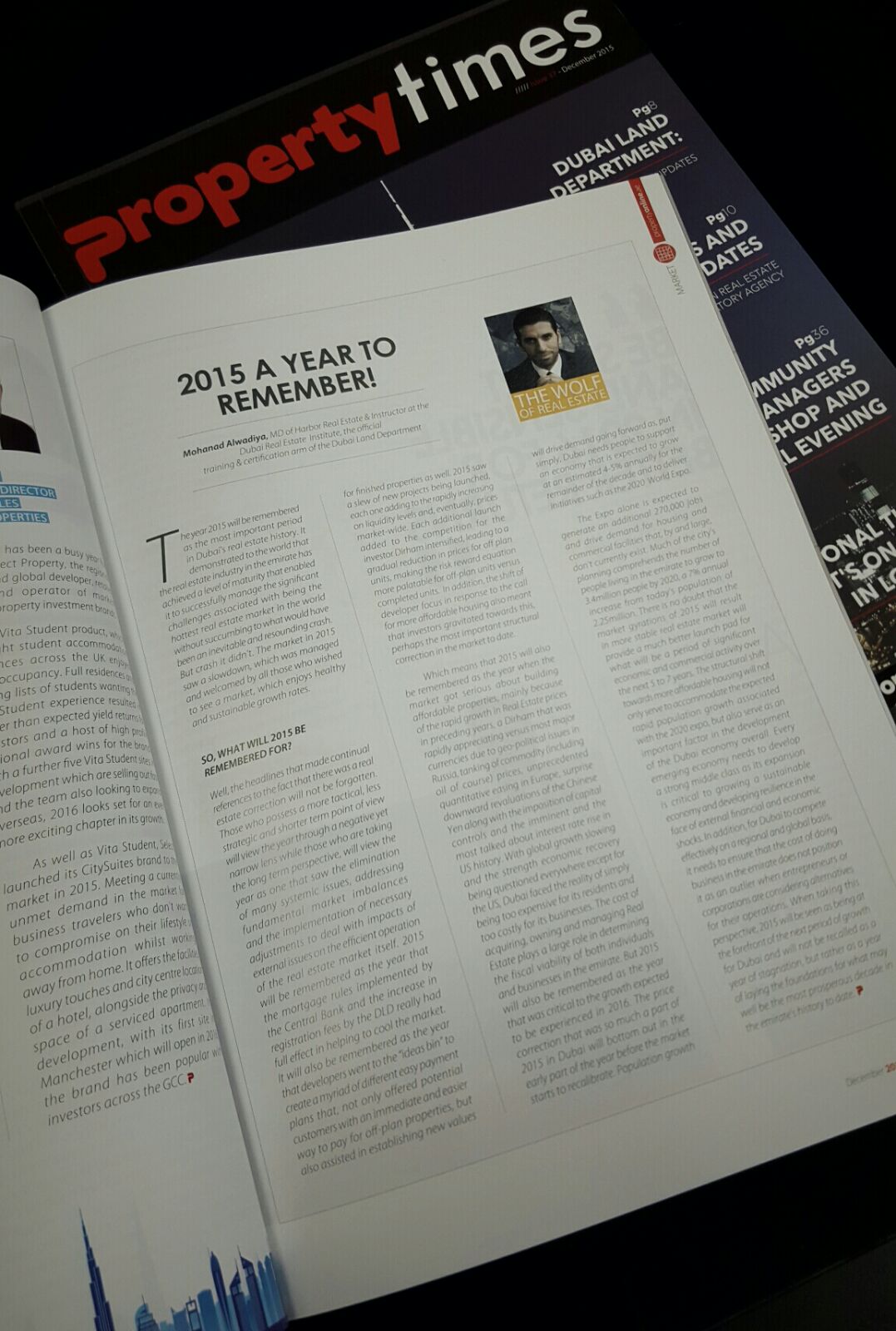 The year 2015 will be remembered as the most important periods in Dubai’s real estate history. It demonstrated to the world that the real estate industry in the emirate has achieved a level of maturity that enabled it to successfully manage the significant challenges associated with being the hottest real estate market in the world without succumbing to what would have been an inevitable and resounding crash.

But crash it didn’t. The market in 2015 saw a slowdown which was managed and welcomed by all those who wished to see a market which enjoys healthy and sustainable growth rates.

Well, the headlines that made continual references to the fact that there was a Real Estate correction will not be forgotten. Those who possess a more tactical, less strategic and shorter term point of view will view the year through a negative yet narrow lens while those who are taking the long term perspective, will view the year as one that saw the elimination of many systemic issues, addressing fundamental market imbalances and the implementation of necessary adjustments to deal with impacts of external issues on the efficient operation of the real estate market itself.

2015 will be remembered as the year that the mortgage rules implemented by the Central Bank and the increase in registration fees by the DLD really had full effect in helping to cool the market. It will also be remembered as the year that developers went to the “ideas bin” to create a myriad of different easy payment plans that, not only offered potential customers with an immediate and easier way to pay for off-plan properties, but also assisted in establishing new values for finished properties as well.

2015 saw a slew of new projects being launched, each one adding to the rapidly increasing on liquidity levels and, eventually, prices market-wide. Each additional launch added to the competition for the investor dirham intensified leading to a gradual reduction in prices for off plan units making the risk reward equation more palatable for off-plan units versus completed units.  In addition, the shift of developer focus in response to the call for more affordable housing also meant that investors gravitated towards this, perhaps the most important structural correction in the market to date.

Which means that 2015 will also be remembered as the year when the market got serious about building affordable properties, mainly because of the rapid growth in Real Estate prices in preceding years, a dirham that was rapidly appreciating versus most major currencies due to geo-political issues in Russia, tanking of commodity (including oil of course) prices, unprecedented quantitative easing in Europe, surprise downward revaluations of the Chinese Yen along with the imposition of capital controls and the imminent and the most talked about interest rate rise in US history. With global growth slowing and the strength economic recovery being questioned everywhere except for the US, Dubai faced the reality of simply being too expensive for its residents and too costly for its businesses. The cost of acquiring, owning and managing Real Estate plays a large role in determining the fiscal viability of both individuals and businesses in the emirate.

But 2015 will also be remembered as the year that was critical to the growth expected to be experienced in 2016. The price correction that was so much a part of 2015 in Dubai will bottom out in the early part of the year before the market starts to recalibrate. Population growth will drive demand going forward as, put simply, Dubai needs people to support an economy that is expected to grow at an estimated 4-5% annually for the remainder of the decade and to deliver initiatives such as the 2020 World Expo. The Expo alone is expected to generate an additional 270,000 jobs and drive demand for housing and commercial facilities that, by and large, don’t currently exist. Much of the city’s planning comprehends the number of people living in the emirate to grow to 3.4million people by 2020, a 7% annual increase from today’s population of 2.25million.

There is no doubt that the market gyrations of 2015 will result in more stable real estate market will provide a much better launch pad for what will be a period of significant economic and commercial activity over the next 5 to 7 years. The structural shift towards more affordable housing will not only serve to accommodate the expected rapid population growth associated with the 2020 expo, but also serve as an important factor in the development of the Dubai economy overall. Every emerging economy needs to develop a strong middle class as its expansion is critical to growing a sustainable economy and developing resilience in the face of external financial and economic shocks. In addition, for Dubai to compete effectively on a regional and global basis, it needs to ensure that the cost of doing business in the emirate does not position it as an outlier when entrepreneurs or corporations are considering alternatives for their operations.

When taking this perspective, 2015 will be seen as being at the forefront of the next period of growth for Dubai and will not be recalled as a year of stagnation, but rather as a year of laying the foundations for what may well be the most prosperous decade in the emirates history to date.