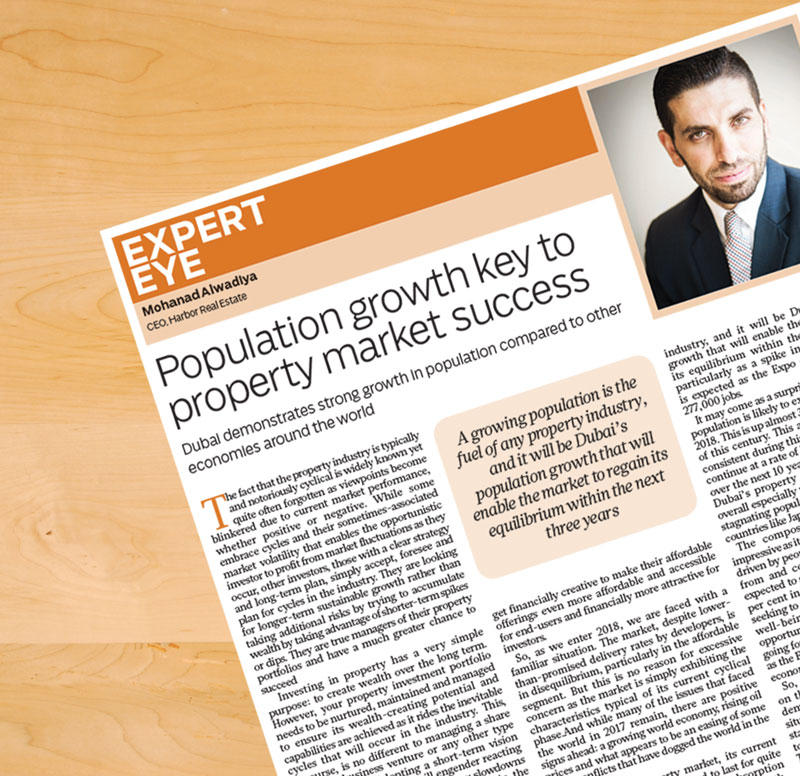 The fact that the property industry is typically and notoriously cyclical is widely known yet quite often forgotten as viewpoints become blinkered due to current market performance, whether positive or negative. While some embrace cycles and their sometimes-associated market volatility that enables the opportunistic investor to profit from market fluctuations as they occur, other investors, those with a clear strategy and long-term plan, simply accept, foresee and plan for cycles in the industry. They are looking for longer-term sustainable growth rather than taking additional risks by trying to accumulate wealth by taking advantage of shorter-term spikes or dips. They are true managers of their property portfolios and have a much greater chance to succeed

A growing population is the fuel of any property industry, and it will be Dubai’s population growth that will enable the market to regain its equilibrium within the next three years

Investing in property has a very simple purpose: to create wealth over the long term. However, your property investment portfolio needs to be nurtured, maintained and managed to ensure its wealth-creating potential and capabilities are achieved as it rides the inevitable cycles that will occur in the industry. This, of course, is no different to managing a share portfolio, business venture or any other type of investments. Adopting a short-term vision and narrow perspective will engender reacting unreasonably to inevitable industry slowdowns which will lead to underperformance in the longer term.

The Dubai market is, having seen a period of falling values, rapidly approaching the bottom of its contraction phase, making 2018 a pivotal year for the industry. This contraction has been brought about by increased nervousness and uncertainty about global and regional geopolitical and economic events, the imposition of VAT, the distraction of alternative “new world” investments such as crypto currencies, along with the burgeoning oversupply in the highly competitive and lower margin per unit affordable segment. Developers, requiring greater sales volumes to achieve financial viability, needed to get financially creative to make their affordable offerings even more affordable and accessible for end-users and financially more attractive for investors

So, as we enter 2018, we are faced with a familiar situation. The market, despite lower than-promised delivery rates by developers, is in disequilibrium, particularly in the affordable segment. But this is no reason for excessive concern as the market is simply exhibiting the characteristics typical of its current cyclical phase. And while many of the issues that faced the world in 2017 remain, there are positive signs ahead: a growing world economy, rising oil prices and what appears to be an easing of some of the conflicts that have dogged the world in the last five years.

As for Dubai’s property market, its current predicament would be expected to last for quite some time, primarily as supply absorption rates are hindered by weak population growth, delaying the market’s emergence from the current phase. But Dubai has one string to its bow compared to a few other economies as the emirate has consistently demonstrated strong population growth, something many countries around the world have tried and failed to achieve.

A growing population is the fuel of any property industry, and it will be Dubai’s population growth that will enable the market to regain its equilibrium within the next three years, particularly as a spike in population growth is expected as the Expo creates an estimated 277,000 jobs.

It may come as a surprise to some that Dubai’s population is likely to exceed 3 million by end of 2018. This is up almost 331 per cent since the turn of this century. This amazing growth has been consistent during this period and is expected to continue at a rate of between 6.5 and 9 per cent over the next 10 years. This is fantastic news for Dubai’s property industry and the economy overall especially when other nations are facing stagnating population growth or, in the case of countries like Japan, falling populations.

The composition of the growth is also impressive as it will continue to be predominantly driven by people seeking to immediately benefit from and contribute to an economy that is expected to grow by a healthy and sustained 3.5 per cent in 2018 and beyond, as those who are seeking to progress and improve their economic well-being take advantage of the superior opportunities that Dubai will continue to offer going forward, courtesy of such major initiatives as the Expo 2020, in addition to the time-proven economic pillars of trade, finance and tourism.

So, the opportunities are there to capitalise on this population growth and resurgence in demand for property this year. The current situation is reminiscent of 2012 when the market started to emerge from the global financial crisis to foster a strong recovery peaking in 2014. The market has shown it has the capability to respond to favourable economic conditions, and as the absorption rates of properties start to build momentum with new aspirants entering the market, the positive effect on value and prices will see handsome returns being made by those who understood the market’s cyclical position and positioned themselves to capitalise on the imminent growth phase of the cycle.