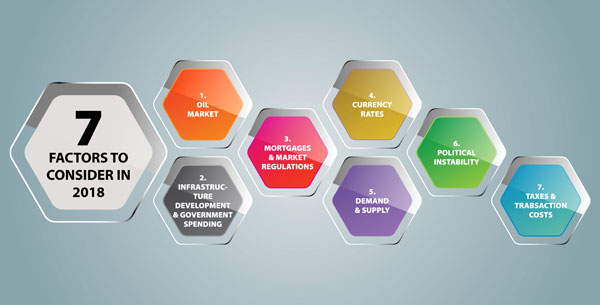 Factors to Consider in 2018

With the advent of globalization, the number of factors that can affect local economies and the industries and markets that operate within those economies has increased dramatically in both number and complexity. Here are some of the more salient influential factors that we at Harbor Real Estate have been considering as we advise our Dubai focused clients in 2018.

Oil. Despite the amount of diversification that has occurred in the Dubai economy and the small proportion of Dubai’s GDP that oil represents, the price of oil still affects liquidity levels throughout the UAE and investor confidence, both essential elements for property market growth.
In December, prices averaged $64/barrel, the highest monthly average since 2014 following an OPEC meeting where members agreed to keep production cuts through 2018 and there is no doubt that maintaining oil at or above the $60/barrel for the duration of 2018 will assist in creating market stability and that is what is being predicted by the U.S. Energy Information Administration in its Short-Term Energy Outlook.

Currency rates. With anywhere between 40% and 50% of investment in Dubai property coming from investors who usually deal in currencies that are not pegged to the US dollar, any strengthening of the US dollar makes it more difficult to invest in Dubai. The USD is likely to strengthen in 2018 as we see the first signs of inflation appear in the US economy.

However, a strengthening dollar is actually a double-edged sword. For the UAE economies overall, it just makes every barrel of oil more valuable and, for those investors who have invested or intend to invest in currencies pegged to the US dollar, a strengthening of the currency increases the value of the investment and any resulting cashflows in terms of other currencies that aren’t pegged to the USD.
Mortgages and market regulations. Historically, mortgages have represented no more than 30%-35% of property sales in the emirate. This ratio has now climbed to well over 50% during 2017 and, in some months, levels of 60+% were achieved. This is great news for several reasons.

First, this trend highlights both confidence of lenders and consumers, mostly owner occupiers, in the market. Most of these new buyers were taking advantage of the abundance of affordable properties on offer that, in addition to the onslaught of attractive payment plans, offered by developers, defined the market in 2017.

The second reason why this is such good news is because we have witnessed, in real time, the market adapting to legislative changes regarding mortgages that were made in early 2014. There is no doubt that the implementation of the mortgage caps earlier in 2014 had affected the demand for many first home buyers who were relying on a mortgage to acquire their dream home, but the dream remained and, for many in 2017, became a reality.

Political instability: The levels of political instability in the world in 2017 seemed unprecedented and is likely to continue through 2018. From Middle East conflicts, North Korean nuclear ambitions, US distrust and threats towards Iran, continuing angst over Brexit a seemingly dysfunctional and increasingly partisan US government certainly portrays a world that is very unsettled place which leads to investor nervousness. Unfortunately, there are no signs that political instability is going to ease any time soon.

Demand and supply: As always, economic fundamental will always play a role in any industry performance. 2018 will commence with a market that moving further away from the equilibrium that we are all seeking.
The focus of developers to satisfy the legitimate and long forgotten requirements of an emerging affordable segment has been overdone during 2016 and 2017, putting pressure on prices, yields and growth across the industry.

The amount of capital shifting from the traditional secondary market to the off-plan market created in a capital allocation imbalance, resulting in declining demand for finished properties. Interestingly, capital allocation was really the issue, as supply was quite healthy in 2017, with mortgages financing over 50% of transactions. It wasn’t that long ago that mortgages made up less than 30% of total transactions, extremely low by global standards.

To suggest a reversal or redirection of capital to the more expansive segments is likely in the short term is mere wishful thinking. The only way to address the issues facing today’s market is to ensure that the long awaited and much speculated upon Expo inspired surge in demand transpires so as to increase absorption, that the predicted 15,000 units expected to be delivered during 2018 is not exceeded or to find other ways to expand the capital pool.

One initiative to do just that is in its final stages of planning: Looking to attract an even greater number of overseas investors, a series of roadshows will be held targeting key overseas markets such as India, China, Russia and the USA with the sole purpose of making investors in these countries to understand the benefits of investing in Dubai.

Infrastructure development / government spending. Dubai’s infrastructural spending continues with a total budget of Dh56.6 billion being announced for 2018. Heavily focused on infrastructure projects led by Expo 2020 the budget comes in line with Dubai Strategic Plan 2021’s targets and future commitments. The budget features a rise in infrastructure spending, which makes up 21 per cent of the total government expenditure. This reflects the directives of Sheikh Mohammed to raise infrastructure efficiency in Dubai for the emirate to become the preferred destination for living, tourism, and businesses across all sectors. The budget’s overall spending represents a 19.5 per cent increase over 2017.

Taxes and transaction costs (registration and transfer fees, commissions, NOC fees): The UAE implemented VAT at the rate of five percent in January 2018. VAT is not a new phenomenon. It has been implemented in many economies around the world and is considered an efficient and equitable way for governments to collect tax revenue to invest, innovate, develop infrastructure and provide services that are required for sustainable economic growth. The IMF has predicted that the UAE may improve GDP by as much as 1.5% by implementing a 5% VAT. Some countries have applied 20% VAT’s to generate the revenues required by their governments without detriment to their property Industries. Yet. Some investors remained concerned and, as has been shown in other economies that have introduced VAT, those concerns will prove baseless with time.