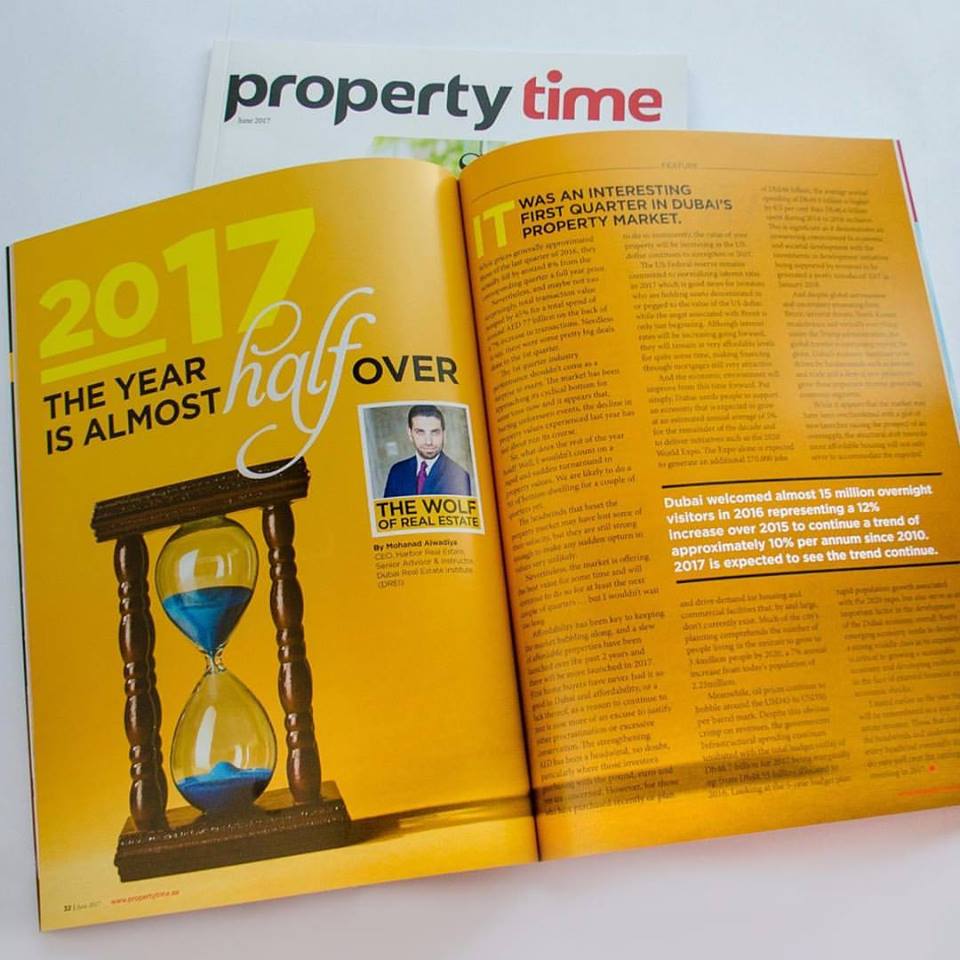 It was an interesting first quarter in Dubai’s property market. While prices generally approximated those of the last quarter of 2016, they actually fell by around 8% from the corresponding quarter a full year prior.

Nevertheless, and maybe not too surprisingly, total transaction value jumped by 45% for a total spend of around AED 77 billion on the back of a 7% increase in transactions. Needless to say, there were some pretty big deals done in the 1st quarter.

The 1st quarter industry performance shouldn’t come as a surprise to many. The market has been approaching its cyclical bottom for some time now and it appears that, barring unforeseen events, the decline in property values experienced last year has just about run its course.

So, what does the rest of the year hold? Well, I wouldn’t count on a rapid and sudden turnaround in property values. We are likely to do a bit of bottom-dwelling for a couple of quarters yet.

The headwinds that beset the property market may have lost some of their velocity, but they are still strong enough to make any sudden upturn in values very unlikely.

Nevertheless, the market is offering the best value for some time and will continue to do so for at least the next couple of quarters … but I wouldn’t wait too long.

Affordability has been key to keeping the market bubbling along, and a slew of affordable properties have been launched over the past 2 years and there will be more launched in 2017. First home buyers have never had it so good in Dubai and affordability, or a lack thereof, as a reason to continue to rent is now more of an excuse to justify either procrastination or excessive conservatism.

The strengthening AED has been a headwind, no doubt, particularly where those investors purchasing with the pound, euro and yen are concerned. However, for those who have purchased recently or plan to do so imminently, the value of your property will be increasing as the US dollar continues to strengthen in 2017.

The US Federal reserve remains committed to normalizing interest rates in 2017 which is good news for investors who are holding assets denominated in or pegged to the value of the US dollar, while the angst associated with Brexit is only just beginning. Although interest rates will be increasing going forward, they will remain at very affordable levels for quite some time, making financing through mortgages still very attractive.

And the economic environment will improve from this time forward. Put simply, Dubai needs people to support an economy that is expected to grow at an estimated annual average of 5% for the remainder of the decade and to deliver initiatives such as the 2020 World Expo. The Expo alone is expected to generate an additional 270,000 jobs and drive demand for housing and commercial facilities that, by and large, don’t currently exist. Much of the city’s planning comprehends the number of people living in the emirate to grow to 3.4million people by 2020, a 7% annual increase from today’s population of 2.25million.

Meanwhile, oil prices continue to bubble around the USD45 to USD50 per barrel mark. Despite this obvious crimp on revenues, the governments Infrastructural spending continues unabated with the total budget outlay of Dh48.7 billion for 2017 being marginally up from Dh48.55 billion allocated to 2016. Looking at the 5-year budget plan of Dh248 billion, the average annual spending of Dh49.6 billion is higher by 6.5 per cent than Dh46.6 billion spent during 2014 to 2016 inclusive. This is significant as it demonstrates an unwavering commitment to economic and societal development with the investments in development initiatives being supported by revenues to be generated a newly introduced VAT in January 2018.

And despite global nervousness and uncertainty emanating from Brexit, terrorist threats, North Korean recalcitrance and virtually everything under the Trump administration, the global traveler is continuing explore the globe. Dubai’s economy continues to be driven by fundamentals such as tourism and trade and a slew of new projects to grow these important revenue generating economic segments.  Dubai welcomed almost 15 million overnight visitors in 2016 representing a 12% increase over 2015 to continue a trend of approximately 10% per annum since 2010. 2017 is expected to see the trend continue.

While it appears that the market may have been overburdened with a glut of new launches raising the prospect of an oversupply, the structural shift towards more affordable housing will not only serve to accommodate the expected rapid population growth associated with the 2020 expo, but also serve as an important factor in the development of the Dubai economy overall. Every emerging economy needs to develop a strong middle class as its expansion is critical to growing a sustainable economy and developing resilience in the face of external financial and economic shocks.

I stated earlier in the year that 2017 will be remembered as a year of the astute investor. Those that can recognize the headwinds and understand that every headwind eventually dies out, will do very well over the coming 7 years by investing in 2017.